Barberton's rich history is steeped in industry and growth.

The city of Barberton was foundied in 1891 by Ohio Columbus (O.C.) Barber, who laid out the ciry as a planned community. 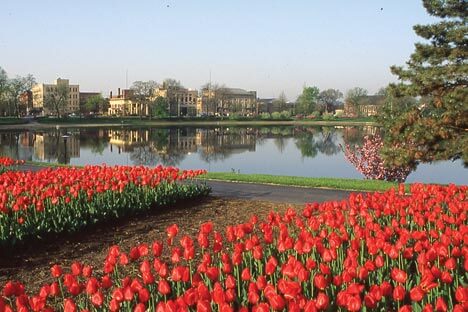 Barberton’s history is as colorful as beautiful Lake Anna during Mumfest. The city was planned around what is now Lake Anna. The design featured a complex web of streets for homes, churches, schools and business districts.

Ohio was bustling with growth from the Industrial Revolution, and Barberton seemed to be ideally situated to take advantage of the growth. Just seven miles southwest of Akron, the city was within easy reach of rivers, railroads and the Ohio & Erie Canal, which opened up direct shipping to Lake Erie and the Ohio River. Barberton quickly became an important industrial center of Northeast Ohio, a position it would occupy for more than half a century.

O.C. Barber himself was a pioneer of sorts. He was a visionary businessman with an entrepreneur’s spirit. In the fifteen years after the Civil War he built his father’s match company into one of the largest in the country. After bringing several factories under the control of the Diamond Match Company, he became known as America’s Match King.

Barberton’s growth was so rapid, a newspaper reporter said the growth was magical. Soon the city became known as the Magic City, a nickname that remains to this day.

Like so many cities steeped in manufacturing, Barberton suffered major job losses in the 1970s and 80s due to urban renewal, disinvestment, and the development of suburban living. Some companies left the city having been lured away by tax abatements and the promise of lower labor costs.

Today’s story is radically different. Barberton is going through a period of rebirth and rejuvenation. The commercial base has been stabilized, and new jobs have been created in education, technology and health care. The community has seen multi-million dollar investments in schools, roads, infrastructure, and recreational facilities, including parks.

Recreation Opportunities Found Throughout the City

Barberton boasts numerous amenities that enhance the quality of life for all of our residents. These amenities include:

Barberton residents also have easy access to other nearby sports and cultural attractions.

The University of Akron’s E.J. Thomas Center for the Performing Arts is home to the Akron Symphony Orchestra. Blossom Music Center, located in Cuyahoga Falls, is the summer home of the Cleveland Orchestra and offers a variety of summer entertainment concerts and programs. And the newly remodeled Akron Art Museum is known throughout the country for its collection of 19th and 20th century American art and photography.

Fans of professional sports are within an hour’s drive of seeing the Cleveland Indians, Cavaliers and Browns. Nature lovers can enjoy hikes throughout the Cuyahoga Valley National Park.

Today’s Barberton is known throughout Northeast Ohio as the home of good schools, good government, a rich history, charming amenities, and a business-friendly community. All are solid reasons for choosing Barberton, Ohio, for your business!